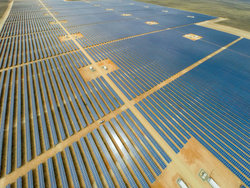 Largest PV project in South-East Europe / Project scheduled to be connected to the grid by Q4 2021 / 130 Million Euro Investment / emission-free electricity for 75,000 households


Athens / Wörrstadt (renewablepress) - The Greek subsidiary of German renewable energy project developer juwi and the HELLENIC PETROLEUM Group signed a purchase agreement today for a portfolio of photovoltaic plants in the final licensing stage, in the region of Kozani. The project, totaling 204 megawatt (MW), is the largest renewable energy project in Greece and among the five largest PV parks in Europe. After its completion the park will produce about 300 million kilowatt hours of climate-friendly electricity – enough to power 75,000 Greek households. It will also save 300,000 tons of greenhouse gas emissions annually.

Commenting on the deal Stephan Hansen, member of juwi’s managing board, said: “This is another major step for the juwi group and in particular for our Greek subsidiary, as it is currently our largest single PV project in the company’s history. The project highlights the enormous potential of solar energy – not just in Greece but all over the world. We have always believed in the Greek renewable energy market. The Kozani project confirms this persistence.” Kozani is located approx. 120 kilometers south-west of Thessaloniki in the north of Greece.

The total investment will amount to 130 million Euros. The transaction is expected to be closed during the second quarter of 2020. Construction will begin in the third quarter of 2020 and will take about 16 months. The project is expected to be put into operation in the fourth quarter of 2021. “The Kozani solar park will also have a significant impact on the local economy, particularly in the area of Western Macedonia, as more than 300 jobs will be created during the construction”, adds Takis Sarris, juwi’s managing director of the Greek subsidiary.

Mr. Andreas Shiamishis, CEO of HELLENIC PETROLEUM said: “The Transaction is a milestone for the Group’s history, as it highlights our ability to play a key role in the energy transition in the country, as well as the East Med region, enabling us to set a target for reducing our carbon footprint by 50% until 2030. The Project is contributing notably towards the transformation of the Kozani region to a renewable energy hub, with a drastic improvement of the environmental footprint and employment creation.”

The project is also a very important step in the implementation of the HELLENIC PETROLEUM Group’s strategy to develop new low carbon footprint activities and accelerating the achievement of the initial target of 300 MW installed capacity of renewable power.


About the juwi group

The juwi group is one of the world’s leading companies in the area of renewable energy. The renewable energy pioneer offers project development, Hybrid Solutions as well as EPC and O&M services. Company activities are mainly projects with solar and wind. The juwi group was established in 1996 in Rhineland-Palatinate/Germany. Since the end of 2014, Mannheim based utility MVV Energie AG has been partner shareholder of the juwi Group. juwi has about 850 employees worldwide, branches on all continents and is actively engaged in various projects all over the globe. Working together with passion to implement renewable energy economically and reliably is what drives us.

So far, juwi has realised more than 1,000 wind turbines with a total capacity of more than. 2,300 megawatts at 180 sites globally. In the solar segment, more than 1,700 projects with a total capacity of around 2,500 megawatts have been designed and constructed. Combined, these energy systems produce around 8.0 billion kilowatt hours of clean energy per year, equaling the annual demand of more than 2.6 million German households. Within the past 20 years, juwi has initiated an investment volume of around 8.8 billion euros to realise these projects.

Press release from the Renewable Energy Industry delivered by Renewable Press
Please note: The emittent / publisher »juwi AG« is responsible for all contents.